Why did India fund terrorists to hold elections? | Kashmir Files #22 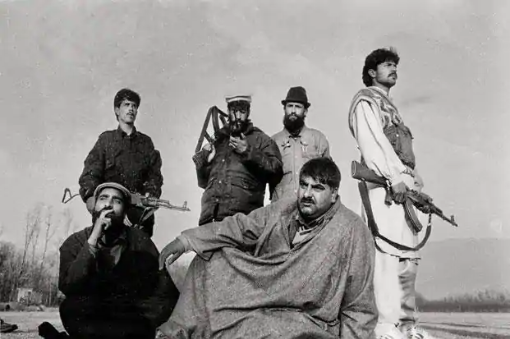 Criminal is a bit subjective to nations, one might be a criminal in one country and not in the other for the same act, it depends on the constitution of the country and so that’s why I used the word “terrorist” instead. With all its varying meaning and definition there are certain criteria that apply universally. I am going to use that definition of terrorism and I’d highly recommend that you read my blog explaining it by clicking here if you haven’t already read it. Now I’ll assume that you’ve read the explanation and thus I shall continue, if you still haven’t, this blog is going to seem bizzare. But anyway, continuing on the matter of discussion here, which is the funding of terrorism by India and how that led to elections.

I’m talking about everyone’s favorite place to visit but not care; Kashmir. The tale begins with Ajit Kumar Doval being sent to Kashmir in 1990. In ’87 after elections were rigged and the opposition was put behind bars an armed-uprising began in Kashmir, a group by the name of HM (Hizb-ul-Mujahedeen) emerged, it was founded by that particular opposition after losing faith in Indian democracy. Now how elections were rigged and the waves that followed is a whole different story, but the way it was “neutralised” was rather monstrous and I’m being polite here, you’ll see. Doval was sent during the governership of General K.V. Krishna Rao. Doval was an one of the finest IPS produced by India, he was from Kerala cadre, he was also the first police officer to get Kirti Chakra. All in all a trained person to handle the situation of armed opposition for India. How would it be if a criminal (by a nation’s law) was released to do crime (as per the nation’s law) against criminals (as per the same law)? To be blunt the only way this could be possible, or rather applicable would be if the criminal does the crime in favor of an ideology.

Now enters the crime boss; Kuka Parray. Parray was originally a folk singer, and later joined the “militancy”, following Doval’s arrival in Kashmir, Parray entered in a dialogue with the Indian intelligence and formally surrendered to the Indian security forces in 1993. Later on, following this surrender, 28 others jumped on the same wagon and under the leadership of Parray formed the pro-government (i.e. no plebiscite and against all those who desire a plebiscite) militia Ikhwan-il-Muslimin commonly known as Ikhwans. The Indian government gave full military and financial support and reinforced the group with another former “militant” Fayaz Nawabadi who was released from prison prematurely for that purpose. These “friendlies” as the Indian military called these “pro-India militants” gave the counter-insurgency operations a significant boost and you’ll see how well it was done. At that time there were zones or towns in the management of HM, and the goal of Ikhwans was to take the control. By the end of 1995 Parray had effectively taken control of areas such as Baramulla and Islamabad and was moving towards Srinagar. By the end of 1996, the Ikhwans were openly flaunting their arms in the Valley and Parray was the most important person after Farooq Abdullah. In The Pioneer Rahul Bedi wrote in ’96: “In short the state sees Parray and his men ruling Kashmir.”

Now in ’96 elections were held as a result of the crushing of the opposing “militants” in Kashmir Valley and Parray formed the J&K Awami League party and contested election himself which he won. Till now all you can see is the tiny moral dilemma of committing unknown crimes against known “militants” and thus safe guarding the Indian democracy – a really good way of relieving your conscience. Then let’s look at how it was done, let’s see how well you hold up your belief.

The Indian forces didn’t just use the Ikhwans only for counter-insurgency operations. Ikhwans were abhorred and feared across the Valley and Indian forces used them to terrorize the non-combatant local population. An army officer admitted to the Asia Times in 2003, September that “he had used the Ikhwans to ‘persuade’ locals who had filed ‘baseless complaints’ against his men to withdraw their charges.” Fayaz Nawabadi was particularly cruel and ruthless, he earned the post of Commander-in-Chief but Parray remained the Supreme Commander. “Even policemen had to look down while walking past him,” said a resident of Ganderbal, areas such as Ganderbal, Pampore, Pulwama, Sopore etc. remained the main focus of the Ikhwans. Fayaz is said to have killed hundreds to innocents but there are certain notable mentions that you might “enjoy” and forget and then to cool your head read novels, but regardless, read these…

“If his eyes fell on something he liked, it had to be his” relates the resident. One day he happened to see and like a new scooter, parked in the Safapora market, belonging to 21-year-old Waseem. Waseem would not let just let go of his scooter when Fayaz asked him to. Fayaz then walked up to him, held him by his throat and pumped bullets into him. Waseem dies on spot. A shopkeeper raised his voice against it in the moment and he was killed too. Fayaz then said, “O [people of] Safapora, whoever goes against us [Ikhwans] will meet a similar fate.” Aside from HM, a political opposition Jammat-i-Islami was also a major focus of the Ikhwans. As the reign of terror engulfed Sonawari, Safapora, Ganderbal it started a wave of migration from there to the urban areas, with some leaving Kashmir altogether. Saif-ud-din Bhat, a 60-year-old teacher was murdered because his brother was associated with HM. Another teacher Abdul Karim Bhat was killed because of links with the Jammat.

I’ve noticed that the stories such as of Waseem and others don’t really raise the concern for many, it looks like “collateral damage” to people and they with a hesitant sigh just move on. With that being said, to be frank it’s the terror on women and children that seems to get all, which is why I think the cases such as Kunan Poshpora are especially buried by the Indian media and government. But I don’t know how that relates to not having as much of a concern with other atrocities. Anyway, then let me allow to get in your head and make you realize if you haven’t already that the more you escape from reality and consequently enjoy doing it, the worse the reality is and gets.

Ikhwanis once went to the house of a Jammat sympathiser in Banyari village. The man they were looking for was not at home. “The routine would have been to terrorize and harass the family and leave but on that day death was in the air,” says Yasir, a resident of the area. “One of the commanders caught hold of a six-month-old baby of the man. He tossed the infant into the air and the Ikhwanis started firing.” The infant came down in pieces. Let me guess, it wasn’t enough, okay then, let’s see how well you do with the next one.

“There was a beautiful girl in Asham, Nazima, the daughter of Ghulam Mohammad Lone. And then Ikhwanis eyes fell on her.” Nazima was kidnapped, it was later found out that the Ikhwani was Fayaz. Details of her state later emerged, when Nazima resisted Fayaz, he took her and she was raped by multiple Ikhwanis and she got pregnant. In the meantime, Ashraf Nawabadi, Fayaz’s brother, started pursuing Nazima’s sister. She too was kidnapped. “The family protested. They wouldn’t have protested if they knew what was to come next,” says Yasir. The Ikhwanis converged on the Asham market. Pregnant Nazima was dragged out on the street. Fayaz oversaw everything. The 8-month pregnant woman was held forcibly, then her clothes were torn right there, after this she was paraded naked. “Fayaz pulled the trigger, and shot her in the abdomen first. He kept on shooting and shouting…” recalls Yasir. Nazima obviously died on spot.

This scene isn’t from Game of Thrones, it actually happened and it was far worse than the cinematic depiction one might want of it, to “feel and understand the pain” because words aren’t enough for people these days, its sicking to me that we want to have movies made about such things to care to know about them. The Indian Army just guarded the democracy that they created in Kashmir, by silently enjoying the show, no FIRs, no investigations, nothing, welcome to Kashmir, and enjoy the stay that was built upon tyranny of the “largest democracy.”

So what happened to Ikhwanis? Did suddenly Indian forces garner a sense conscience? As expected, no they didn’t. It was HM that eliminated the Ikhwans, they started to hunt down these criminals, eliminating Indian army-sponsored hardcore criminals, which I’d say are the actual terrorists here (hope you read the blog I was mentioned), one by one. Commanders such as Kaka, Nikka Bhai and Afzal were shot dead in 1994, ’95, ’96 respectively. The kingpin Fayaz survived 18 attempts on his life, but he too finally met his fate on 17 February 2000. He was blown up in an IED blast in Sumbal, not far from where he had brutally murdered Nazima. According to local residents the blast’s intensity was so high that his body parts could be seen hanging from the power-supply cable running across the streets, unlike the garland of justification and freedom provided by the Indian forces.

But the boss Parray remained alive and well. After having been elected fort the J&K assembly he claimed in ’98 he said, “I have succeeded in achieving this aim as was evident from the successful conduct of the Lok Sabha polls.” By the way Harinder Bewaja’s ground-zero report later clarified what actually happened in the polls: “…voters were herded to polling stations and forced to cast their votes by the security forces. The message of the forces was ‘cast your vote, we will come back and inspect the mark on your fingers.’ Many residents who were forced to go to the polling booths said that the forces had threatened to not let them open their shops if they didn’t vote. As more and more groups of frightened and fear-striken people made their way to vote, it was clear that the elections, after a violence-punctuated gap of seven years, were being held under the shadow of a gun.” It wasn’t the contestants that went to ask for the votes of the people but the army personnel that forced them to just vote, because as we know, in the end it’s going to be rigged anyway. As Rita Manchanda put it “A Hollow Victory for Indian Democracy.” Enjoy your shows.

Unto Death: The Folly of a Naturalistic Legacy

It is unbelievable that you’re still here, still working, striving, persevering, resisting and most importantly, and the least surprisingly, still degrading physically; dying. Day by . . .

Flat earth, the Antarctic, and your motherless self | #38

Introduction I won’t be diving into the mess of the flat earth theory, or the enigma surrounding the Antarctic, however the two will be playing . . .